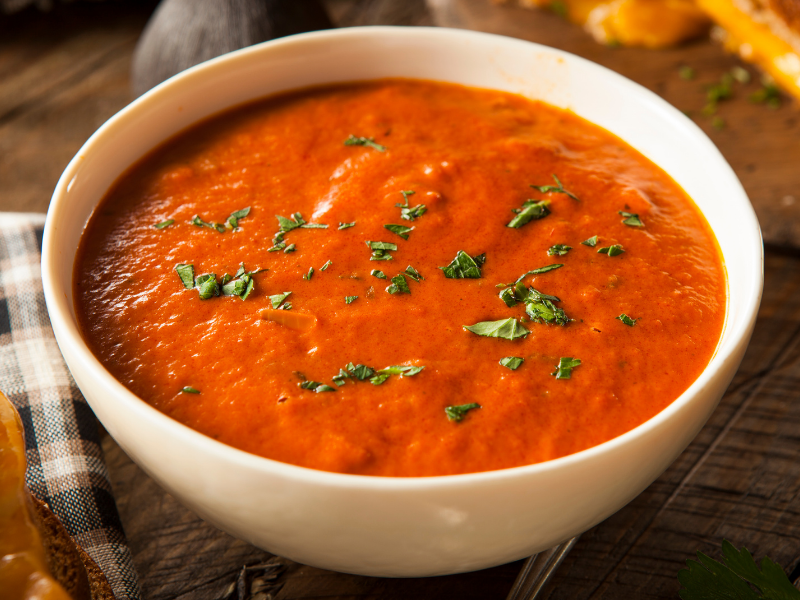 I’ve been making soup for a long time now and I have come to realize that there are so many different ways to make it.

Some soups, like tomato soup, can be difficult to get the right texture in because tomatoes have varying amounts of water content from one another.

In this article we will discuss 9 different methods you can use when thickening tomato soup that will help enhance your recipe in its own special way.

If you have the time, one of the best ways to thicken your soup is by simmering it. This will allow all of the flavors to meld together and will also help to thicken the broth.

To do this, simply cook your soup over low heat until it has reduced in volume by about half.

This could take anywhere from 30 minutes to a few hours, so it’s best to do this when you have some spare time.

If your soup is too thick once it has reduced in volume, you can always add more broth until it reaches the desired consistency.

Thickeners like cornstarch or arrowroot powder are great for this method because they will help to thicken the soup without making it cloudy.

Just make sure that you add them slowly and stir constantly so that they don’t end up lumpy.

Another option is to use flour as a thickener. However, if you do this, you will need to cook the flour for about two minutes before adding it to your soup so that it doesn’t taste raw.

If you’re looking for a way to thicken your tomato soup without adding any extra ingredients, then you could also try cooking it for longer.

If you cook the broth at a low heat, this will allow some of the water to evaporate and will thicken the soup.

This is a really easy way to thicken tomato soup. Just add one or two tablespoons of tomato paste to your soup and stir it in until it’s well combined.

Tomato paste is a concentrated form of tomatoes, so it will help to make your soup thicker while still retaining the flavor of the tomatoes.

Plus, you probably have some lying around in your pantry already!

If you want a richer flavor, I recommend roasting the tomatoes before adding them to the soup.

This can be done by drizzling olive oil on top of whole peeled tomatoes (or diced ones) placed on a baking sheet.

Then bake at 400 degrees Fahrenheit for about 25 minutes or until they are wrinkled and slightly charred around the edges.

Bring the soup to a boil again before adding the tomato paste, otherwise your tomatoes will be overcooked.

You can also add more or less of this ingredient depending on how thick you want it!

Check Out How to Thicken Evaporated Milk

If you want to thicken your soup, but don’t have hours to wait for it to simmer on the stovetop, then a roux is an answer. It will take about 30 minutes from start to finish!

To make a roux, simply mix flour with butter in equal parts by weight (e.g., 150 grams of each).

Then, cook the roux over medium heat until it becomes a deep golden brown. This will take about 15 minutes.

Once the roux is made, slowly add some of your soup broth to it while whisking constantly.

Make sure to add just enough so that the mixture doesn’t become too thick. Then, add the mixture back to your soup.

It’s important that you whisk constantly while adding broth and again when it is added back into the pot because if not, lumps can form which will be very difficult to get rid of later!

If this happens, don’t worry; there are still options for getting rid of them.

You can always strain your soup through a fine-mesh strainer to get rid of the lumps. Or you could use an immersion blender and blend as much as possible until it’s smooth again.

Once blended, stir in the rest of your ingredients and simmer for about 30 minutes so that flavors can meld together.

Get Out How to Tell When Your Banana Bread Is Done

Adding cream or milk to your soup is a very easy way to thicken it. Just remember that the more you add, the richer and creamier your soup will be.

If you’re using cream, add it towards the end of cooking so that it doesn’t break down and curdle. You can also add some cornstarch to help stabilize the cream.

If you’re using milk, it’s best to add it before adding any other ingredients so that it can cook down and thicken.

You could also try evaporated milk or creamed corn which will give your soup a thicker consistency.

How to Store Used Tea Bags (Plus Uses for Them)

Egg whites are a great way to add body and texture to your soup. You can use them in any kind of creamy or set-based soup, like Tomato Soup. Just beat the egg white until it’s stiff

and then stir it into your boiling tomato soup for about five minutes.

This will thicken the broth while adding volume without changing its flavor too much.

Keep stirring so you don’t end up with lumps… but if there are some, they’ll dissolve when you heat up the mixture again later on!

Egg white is also easy to clean because it doesn’t leave behind any debris that might be hard for you to get out of the pot afterward either.

You could just whisk an egg white and add it to the soup… but if you use an electric mixer, this will incorporate more air than a whisk does.

Your egg white mixture should be fluffy with medium peaks. You don’t want it too runny or stiff because then your broth won’t thicken as much as you need it to!

If there is any extra, you can store it in the fridge for up to two days.

Add one egg white at a time and make sure that each one is fully beaten before adding it to the soup. This will help prevent lumps from forming in your soup.

Check Out How to Store Pineapple Upside Down Cake

Starches are an easy way to thicken tomato soup. And there are so many different types of starches you can use!

All you need to do is mix the starch with a little bit of cold water until it forms a slurry. Then add it to your boiling soup and let it simmer for a few minutes until the desired thickness is achieved.

If you’re using flour or cornstarch, make sure to cook out the raw taste by letting the soup simmer for an extra minute or two after adding the starch slurry.

This will also help get rid of anyumps that may have formed in your soup.

Potato starch and arrowroot powder do not require any cooking time, so just add them to the soup and let it simmer for a few minutes.

Flour is one of the most common ingredients used to thicken soups. There are two ways you can go about doing it: using a roux or adding flour directly into your soup.

Roux is made with equal parts fat and flour, which makes for an excellent thickening agent when added to your tomato soup.

The downside? You have to cook out that raw taste from the bottom of the pan because they don’t get blended in well enough in this method.

It also takes some time before a finished product is achieved so if you want something done quickly, you might not want to try this route.

To add plain old cooked-out all purpose or whole wheat flour straight into your desired amount of tomato soup, use a whisk to mix it well before adding. Continue stirring the stew so that all of the flour is dissolved and not lumpy!

Be careful with this method because if you add too much flour…well then your soup will become thick like paste! You can also try using pastry cream as an alternative option for thickening soups.

Adding cheese, nuts, or bread crumbs to your tomato soup will not only thicken it up, but will also give it a nice flavor and texture.

Cheese is a great way to thicken your soup because of its high-fat content. This will help to coat the other ingredients in the soup and prevent them from dissolving into the liquid.

Nuts are perfect for thickening soups because they are ground up and have a lot of fiber which can absorb lots of moisture. They also add a delicious crunchiness and nutty flavor to your soup.

Bread crumbs work similarly to nuts by absorbing excess moisture and adding flavor at the same time. Try using them as a topping on your soup bowl for extra deliciousness.

thicken tomato soup, dissolve into the liquid, coating the other ingredients, prevent them from dissolving, crunchiness and nutty flavor, absorbing excess moisture, adds a delicious crunchiness.

The next way to thicken your soup is by adding more veggies. This will not only help thicken the soup, but it will also give it more flavor.

Some good veggies to add are potatoes, carrots, and celery. These three veggies are a great base for any soup because they have a mild flavor and also help thicken the soup.

You can either dice or chop these vegetables before adding them in, but make sure they’re small enough so that they will cook through in the amount of time your soup has left.

If you want to use frozen vegetables, that is fine too! Just let them defrost first before adding them in.

This is a great option if you want to add more nutrients and fiber to your soup while also thickening it up at the same time.

Bonus: You could also try using pureed veggies as well. This works especially well if you’re trying to cut down on mouthfuls of vegetables.

Another bonus tip is that using canned veggies will also work, but be sure to drain them first before adding them in so they don’t make the soup too watery.

When it comes to getting around to making the kinds of soup that you love, you will find that there are some situations where it is going to be harder to get the texture that you are looking for in your soup.

Take tomato soup as an example. Tomatoes have varying amounts of water content between each separate tomato, which means sometimes you might not have a problem with this but other times if can end up being a bit too watery or thin without any thickness at all.

I’ve got 9 tried and tested methods here and they should help make sure even when things don’t go right from time-to-time, your soup still turns out delicious!