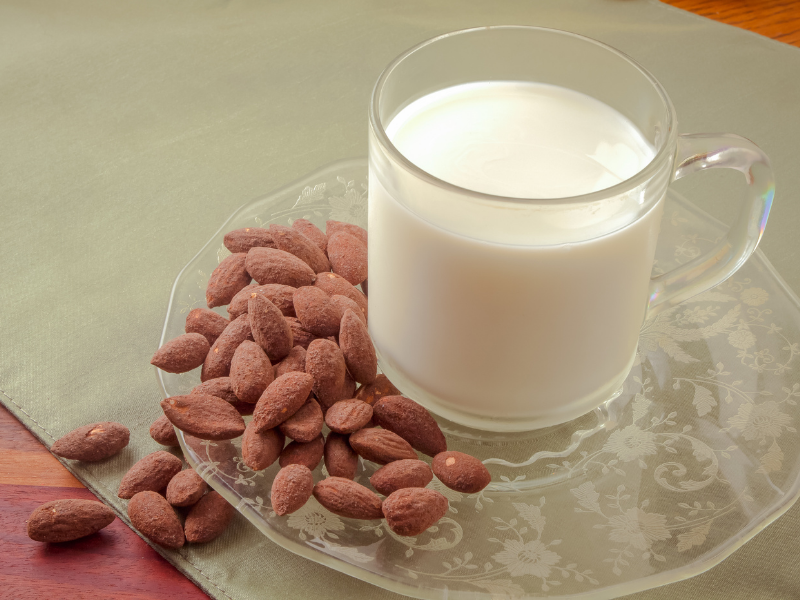 Have you ever tried baking with almond milk? If not, you might be missing out on some of its amazing benefits!

Almond milk is a great cow’s milk substitute and can be used in any recipe that needs it. However, there are some things to keep in mind when substituting for this ingredient.

The first thing to remember is that almond milk has a low boiling point and can easily boil over.

So if your recipe requires boiling the almond milk, make sure you watch it carefully so as not to lose too much liquid or have a mess on your hands!

Also- don’t forget about thickening agents like flour or cornstarch which will help thicken up the mixture without changing anything else in the recipe.

What Is Almond Milk?

Almond milk is a dairy-free, gluten-free, vegan drink made from ground almonds. It can be used as a substitute for cow’s milk in many recipes.

Get More 13 Tips to Safely Transport a Cake Long Distances

How to Substitute Almond Milk in a Recipe?

When it comes to baking with almond milk, sometimes you might need to make a substitution for cow’s milk. If a recipe calls for cow’s milk and you only have almond milk on hand, don’t worry! There are some easy ways to make the switch.

The first thing you should do is try to find a recipe that originally calls for almond milk. This way, you won’t have to do any substituting and the recipe will already be tailored to work with almond milk.

If you can’t find a recipe like this, or if you need to make a substitution in a recipe that doesn’t call for almond milk, don’t worry – we’ve got you covered.

The most important thing to remember when substituting almond milk for cow’s milk is to use the same measurements.

For every cup of cow’s milk that a recipe calls for, use one cup of almond milk instead. This will help ensure that your baking turns out correctly.

In addition, it’s important to keep in mind that almond milk doesn’t have as much protein as cow’s milk does, so your baked good might not be as dense or filling if you make the switch.

However, this isn’t always a bad thing – sometimes people prefer lighter and fluffier textures in their baked goods.

If you’re looking for a way to make your baked goods a little bit healthier, using almond milk is a great way to do that.

Almond milk is lower in calories and fat than cow’s milk, so it can be a good option if you’re trying to watch your weight or dietary restrictions. Plus, it’s a great way to add some extra flavor!

Check Out 8 Tips for Baking with Whole Wheat Flour

How to Match Almond Milk to Cow’s Milk in a Recipe?

If you need to make a substitution for cow’s milk in a recipe and the recipe doesn’t call for almond milk, don’t worry – it’s easy to do. In order to make sure that your baking turns out correctly, you’ll want to match the measurements of almond milk to cow’s milk. For every cup of cow’s milk that a recipe calls for, use one cup of almond milk instead.

This will help ensure that your baking turns out the way it’s supposed to. Keep in mind that almond milk doesn’t have as much protein as cow’s milk does, so your baked good might not be as dense or filling if you make the switch.

However, this isn’t always a bad thing – sometimes people prefer lighter and fluffier textures in their baked goods.

If you’re looking for a good substitution to make in your next baking recipe, almond milk is a great option.

It’s dairy-free and gluten-free, so it’s perfect for people with dietary restrictions. And, since it has a mild flavor, it will pair well with most ingredients.

So the next time you find yourself needing to make a substitution in your recipe, don’t forget about almond milk! It might just be the perfect ingredient for your next baking project.

Get More 11 Smart Ways to Fix a Dense Cake

When you’re baking with almond milk, the color of your finished product might be a little different than if you were using cow’s milk.

Almond milk is a light beige or white in color, so baked goods that are made with it may also have a slightly lighter hue.

If you want to make your baked good look more like it would if it were made with cow’s milk, there are some things that you can do.

You can add a teaspoon of vinegar to the recipe while you are mixing it, which will help “set” the dye and give your food a more familiar color.

Another option is to use an all-purpose flour blend that includes dairy products; this will also help to give your baked goods a more familiar color, and it will also add some beneficial nutrients.

Finally, you can also use food coloring to adjust the color of your finished product.

If you’re not interested in making any changes to the recipe, you can simply accept that the color of your food will be a little different than what you might be used to. After all, almond milk is still a perfectly healthy and delicious option for baking!

Check Out 8 Smart Things to Do with Ruined Muffins

Can You Boil Almond Milk?

One of the most common questions about almond milk is whether or not it can be boiled. The answer is yes – you can boil almond milk.

However, since almond milk doesn’t have as much protein as cow’s milk, boiling it for too long will cause the milk to break down and lose its creamy texture.

So if you’re using almond milk for a recipe that requires boiling, make it at the very last minute and remove from heat the second it starts to boil.

Another thing to keep in mind when boiling almond milk is that it has a low boiling point, which means it can easily boil over.

So be sure to keep an eye on it while it’s boiling, and if it starts to boil over, reduce the heat.

Check Out 7 Smart Things to Do With Burnt Cookies

How to Thicken Almond Milk for Baking

When baking with almond milk, you may find that the recipe needs a little bit more thickness.

Almond milk is thinner than cow’s milk, so if your recipe doesn’t call for any thickener, it might turn out too thin. There are a few ways to thicken almond milk for baking:

No matter which method you choose, make sure to stir the mixture well so that there are no lumps and it is fully combined with the almond milk.

Then, add it to your recipe as directed. With a little bit of thickener, you can easily make almond milk work in any baking recipe!

When it comes to baking, almond milk is a great cow’s milk alternative. However, there are some ingredients that almond milk doesn’t go well with. These include:

Overall, the main takeaway is to use recipes that list almond milk as an ingredient in their original recipe. This will ensure you’re using them correctly and not risking any disasters with your baking endeavors.

You might even find that some of these options are healthier than cow’s milk or easier for those who have allergies!

So if you want a healthy alternative when it comes to cooking, try substituting almond milk instead of cow’s milk- what do you think? Let us know in the comments below about how this change has impacted your baked goods so far.