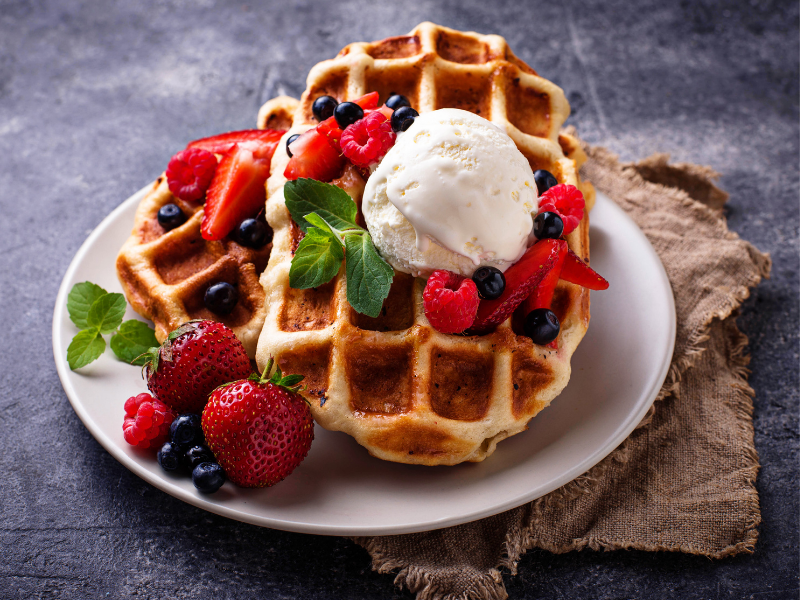 It’s not that waffles are really that hard to make, but sometimes people will have problems getting them to turn out just how they want.

For example, you might be noticing that your waffles are not rising properly. Why is this happening and what can you do to try to turn things around?

Keep reading to get important information about why your waffles might not be rising. Once you’ve figured things out, you’ll be able to get back to making a scrumptious breakfast!

1. You’re Using Yeast and You Don’t Know How

One of the more common reasons why waffles won’t rise is that people decide to use a recipe that includes yeast.

If you’re using a more complex waffle recipe such as this, then you’re going to want to understand how to work with yeast.

Using yeast in a recipe generally requires it to be prepared, and if you’re using proofing yeast, then it’s going to take eight hours to be ready.

This means that you have to prepare things the night before you plan to make your waffles.

Take a look at the recipe that you’re using as well as the type of yeast you have. Did you try to use yeast without preparing it properly?

If this is the issue, then that is the reason why your waffles are not rising as they normally would.

Thankfully, you can fix things by following the recipe to the letter and giving the yeast the time that it needs.

You might still need to throw out your failed batch of waffles, of course, but you know what to do for next time.

Always be careful when working with yeast because it isn’t always as easy as some people are used to.

Get More Useful Tips for Baking with Almond Milk

2. Forgetting to Lighten the Batter

Another common issue that people face with waffles is that they forget to lighten the batter.

This means you need to use an egg, milk, and any other liquids in your recipe before adding flour.

If this step isn’t followed properly then your mixture will be way too heavy for yeast or baking powder to do their jobs correctly.

You can fix things by following the instructions on the packaging of whatever brand of self-rising flour you are using as well as checking out some recipes online so you know how it should look when done right!

Once again, if this happens then don’t panic because there are plenty of ways to solve this problem without having wasted ingredients or time.

Just think about what happened and why it happened so you can do better next time.

Check Out 13 Tips to Safely Transport a Cake Long Distances

This could mean that the heating element isn’t on all of the ways or it is covered in batter.

You can test this by spraying cooking oil onto your waffle maker and then turning it on to a medium-high heat setting.

If you hear a sizzle, then it means that the machine is ready for use.

If your waffle maker doesn’t have removable plates, then you should try using an oven mitt to help loosen them so you can clean them properly.

Just make sure that your mitts are oven-safe! Remember that different machines work differently, so if one brand of waffle maker isn’t giving you good results then switch to a different one.

With that in mind, you might need to experiment with a few different machines before finding the right one for your needs.

Get Out 8 Tips for Baking with Whole Wheat Flour

If you’re using a recipe that doesn’t call for yeast, then it’s likely that the recipe is using baking powder or baking soda instead.

You should remember that these two leavening agents can’t be used interchangeably and they aren’t equal in every way either!

Baking powders usually include cornstarch, so this means you need to use a ratio of one teaspoon per cup of self-rising flour because it will also provide structure for your waffles.

Baking soda doesn’t contain any starches, but if you add too much then your batter might not rise properly after all which defeats the whole point of using it in the first place!

If you end up choosing incorrectly, then there are some things that you could try in order to fix the problem.

For example, you could use baking soda for half of the recipe and then add some extra baking powder to help give your waffles more lift.

If that doesn’t work then try using half of the baking soda and add some extra baking powder.

Remember not to use too much leavening agent because it can have some unwanted side effects.

For example, if you add too much baking powder then your waffles will be dry and tough instead of light and fluffy.

Check Out 11 Smart Ways to Fix a Dense Cake

5. Using the Wrong Type of Flour

Last but not least, you might be having problems with your waffles because you’re using the wrong type of flour.

For example, if you are using all-purpose flour then your waffles will be dense and heavy instead of light and fluffy because this kind of flour doesn’t have any gluten in it!

When baking with self-rising flours or regular whole wheat pastry flours, make sure to use a ratio of one cup per every five eggs that are used.

This means for each egg, you should add around two cups worth of the best quality flour you can find which is usually at least four grams per serving.

You could also try adding some vital wheat gluten as well so your recipe tastes better overall!

Remember not to substitute other kinds of non-gluten flours because they’t work quite the same.

If you’re looking for a gluten-free waffle recipe, then there are plenty of them available online that you can try out!

Get More 8 Smart Things to Do with Ruined Muffins

6. Your Waffles Aren’t Cooked All the Way Through

Now that you know some of the reasons why your waffles might not be rising, it’s time to take a look at some of the other potential problems that you might be having.

For example, your waffles might not be cooked all the way through which means they can be quite bland and doughy in the middle.

There are a few things that you can do in order to try and fix this problem. One solution is to make sure that your batter is spread evenly across the entire surface area of the waffle maker before cooking them.

You should also avoid opening the lid during the cooking process because this will let out heat and steam which could affect how well your waffles turn out in the end.

If you’re using a recipe that doesn’t call for yeast, then it’s likely that the recipe is using baking powder or baking soda instead.

You should remember that these two leavening agents can’t be used interchangeably and they aren’t equal in every way either!

Baking powders usually include cornstarch, so this means you need to use a ratio of one teaspoon per cup of self-rising flour because it will also provide structure for your waffles.

Baking soda doesn’t contain any starches, but if you add too much then your batter might not rise properly after all which defeats the whole point of using it in the first place!

Another common reason why your waffles might not be rising is because you are using the wrong type of flour.

There are a few different types that work well with baking powder or yeast, but they aren’t all interchangeable.

You should consider swapping in self-rising flour if you have it on hand so that things will start to go a little more smoothly.

If you don’t have any on hand, then make sure that you are using the right type of flour for the recipe you’re following.

This is an easy mistake to make, so it definitely isn’t your fault if this happens. Just be aware of which types of flour work well in a waffle recipe and try to avoid making this mistake in the future.

Lastly, If all else fails, there might be something wrong with your baking powder or yeast.

This is probably the least common reason why things go wrong, but it can happen from time to time.

In order to check whether this is the issue, you can try replacing one of these ingredients with another one.

If this doesn’t solve your problem, then you might need a new tube of baking powder or yeast.

One brand could be working better than the other one for some reason which is making things go wrong. Just pick another product and try again!

The last reason why your waffles might not be turning out the way that you want is because of problems with your waffle maker.

This could mean that things are getting stuck, the plates aren’t heating up enough, or there is some other issue.

In order to troubleshoot this problem, you should start by cleaning your waffle maker.

This is an easy fix that can make a huge difference in how well things turn out, so it’s definitely worth trying before calling someone else to do the job for you.

If this doesn’t work then it might be time to invest in a new machine because your current one has problems with heating up evenly or something of that sort.

Even though waffle makers are expensive, they will last for many years if taken care of properly!

If you’re not using yeast, then there are other potential issues that might be causing your waffles to not rise.

For example, if you’re making a recipe that you found online, it is possible that the measurements were incorrect.

This means that something as simple as the wrong type of flour could cause your waffles to not rise.

This is why it’s always important to double-check recipes before you start making them, especially if they are more complex.

If the recipe is one that you created yourself, then make sure that you follow all of the steps correctly so that there isn’t something missing.

It can be really frustrating when a recipe doesn’t turn out as planned, but thankfully this problem is fairly easy to solve.

Just check your measurements and make sure that everything is correct before starting to cook.

If you find that your waffles are not rising, one of the following might be happening. First off, it’s possible that you don’t have enough baking powder in your batter.

his ingredient helps to create bubbles and expand the dough so there is more space for air pockets when cooking.

If this seems like something you could try out, simply add an extra teaspoon or two next time you make a batch.

It may also be helpful if you let your waffle iron heat up before adding any batter to see if they rise better than usual with some preheating time on them first.

Another possibility is that too much moisture has made its way into your mixture which can prevent things from expanding properly as well as keep anything from browning.